Miranda Vukasović is a Croatian-born artist and designer. She has moved continuously, settling briefly in Zagreb, Milano, Rio de Janeiro, Paris, Mexico City, London, New York, and most recently Beijing, passing through thousands of destinations in between.

Miranda has been working in the field of architecture, design, and art for over ten years. She has extensive experience in project design and production, drawing from her collaborations with a wide range of design studios across Europe and the USA. Her passion for architecture has led her to work on a broad range of projects within the field, including serving as an exhibition designer and curator with Renzo Piano Building Workshop (www.rpbw.com).

Miranda holds a master’s degree in Design from the Polytechnic of Milano (2007) and a master’s Degree in City Transformation and Urban Planning in Mexico City with Centro Metropolitano de Architectura Sostenible and Universidad Politecnica de Cataluña (2009). In 2013, she presented her first jewelry design showcase in collaboration with Micro Macro studio at the Beijing Design Week. This work was also shown in the exhibition “ARTchitecture – the Way we Design” at Today Art Museum, China. In 2016, she started her eponymous fine jewelry and sunglasses brand MV, inspired by her passion for architecture. Since 2018, Miranda has designed furniture for Studio Constellation, Milan, has created both 2D and 3D works in conjunction with Peking Art Associates for Star, Sydney, and has designed a sound and light performance pavilion for the inaugural Gobi Heaven Art Festival that was published in National Geographic China edition in September 2019.

She is also the founder of The Radiance, an experimental music group of musicians combining Eastern and Western instrumentation. In 2018, The Radiance was recognized internationally with The Akademia Music Award for Best Ambient / Instrumental Song for Flying Kites. In fall 2019, the music group completed their second album, “The Temple Project”, which was recorded and filmed in a 600-year-old Buddhist temple in Beijing. The album is an audiovisual installation that includes re-creating transcend spaces within vibrations of the sound in the space, and its international team includes the Grammy award-winning producer Jeff Bova (Céline Dion), Ned Douglas (Stevie Nicks, Mick Jagger), and the director/VFX artist Jeff Ranasinghe (Avengers, Ant-Man and the Wasp). The goal of their work is to capture the spirit of the temple, both acoustically and visually, and then to combine them in a new space.

In February 2018, Miranda was invited to speak about forms of music collaborations at The New Museum, New York City, organized by CMYK Matinee. Once again blurring boundaries between art forms, in March 2019, she directed the exhibition-specific musical and dance performance in conjunction with Marc Quinn’s exhibition at The Central Academy of Fine Art Museum, Beijing.

Miranda’s passion for connecting disciplines across the arts and design informs both the aesthetic and technical aspects of all her practice. 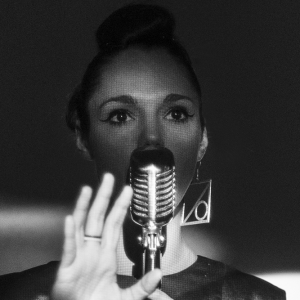 I have captured my moments of ups and downs in my stories. I express my own fragility through tears, which sometimes fall like little berries, sometimes appear through smiles—just like rainbows popping up during a sunshower, each time the tears I shed lead to a small change within me. Through the awareness of my fragility, I have come closer to myself.