Adina’s journey from a small town in her native Romania to a life as an international affairs scholar and Human Rights activist was lengthy and challenging. She commenced her unlikely story at Schiller International University where, under the influence of her professors, she discovered her calling for International Relations and Diplomacy. Her long-lasting passion for politics and international affairs reached its height in 2010 with her first book in Italian: Romania 1988-2008: 20 Anni di Transizione alla Democrazia.

After obtaining two master’s degrees in International Studies and Human Rights Protection, Adina began her career working as a consultant in the Economic Department of the Rome City Council in Italy. Following her time in Rome, she took a position at the Romanian Embassy in Washington D.C., where she first encountered the human rights work of the Organization of American States. Adina embarked on a lifelong love affair with Latin America, which has influenced her major fiction writings, such as her travel book about Buenos Aires: Captivanta Cucerire.

Today, Adina’s work appears in some of the world’s most important lifestyle publications (e.g., L’Officiel, Cosmopolitan, Buro 24/7, Grazia, Society Magazine, Fashion TV, ZINK Magazine) and has been translated into English, Spanish, Slovene, Bulgarian, Armenian, and Russian. The success of her columns also led to the creation of her style book, Reguli de Stil (published in 2012), which became the groundwork for an updated version, Pearls and Elegance (published in English in 2014).

Beyond her notable resume, Adina is also lauded for her political engagement and humanitarian activism in the fight against human trafficking and pediatric cancer and for the rights of the refugees and Asylum seekers. Her wanderlust has carried her to every corner of the world including fifteen countries on four continents, making her a quintessential global citizen.

With eight books published in three languages and her byline on numerous articles and reviews, Adina is happy to be living the life of a modern storyteller, while remaining faithful to her own values and her quest for authenticity. 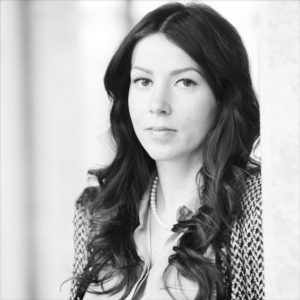 I was not only the master of my own life, but also the sole responsible for every success and failure, for every decision and misstep; while this newly found freedom offered me the opportunity to write my own story.